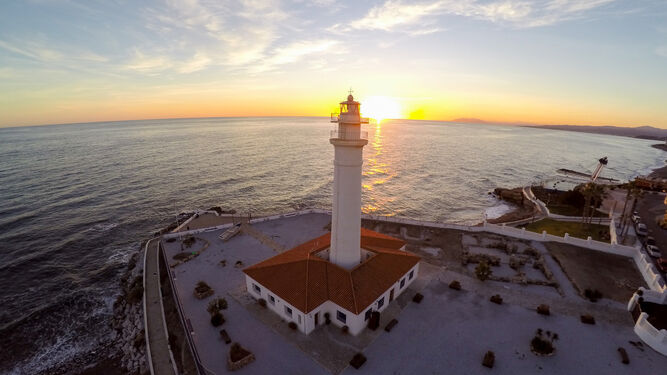 You must arrive very early to the sandbanks of Torrox if you want to reclaim a piece of the coast, a piece of the independent republic of your summer. There is no reservation worth. In none. So all the beaches of Torrox become a kind of real-time strategy game in which we must conquer our own nano-kingdom for a day. Each new dawn, a conquest that starts from scratch. 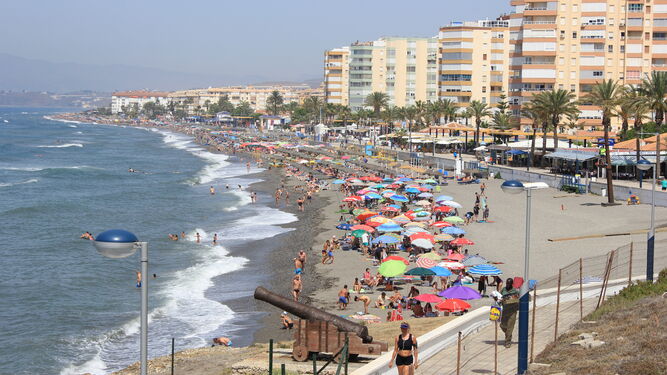 Ferrara beach is the only beach in Torrox that proudly has a Blue Flag that certifies its quality.

Ferrara beach is a wide cove of fine dark sand and moderate waves, 1,300 meters long and 30 wide, which houses the highest percentage of concessions and restaurant and leisure facilities, both seasonal and fixed, between the Barranco del Munch on the Lindes beach and the Torrox lighthouse.

Behind its promenade there are several urbanizations and buildings associated with tourism, which is why the occupancy rate of this beach is high, especially in the summer months.

It also stands out for the special environmental protection that is delimited at the tip of its lighthouse, since an endemic and native species of the Malaga coast called limonium malacitano occurs here, a species that is only represented in this area of ​​the municipality.

Near the lighthouse, we also find the Torrox dog beach. This is the easternmost beach for dogs in the province, and is delimited between the lighthouse and the local river.

Easily accessible and made up of gravel, this is a very quiet canine cove that, according to regulations, does not have any type of time limitation and bathing is not recommended for people, not even for owners. 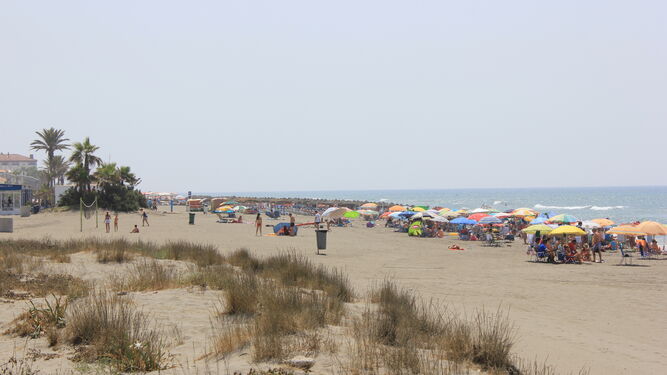 Playa de las Lindes is also known as Playa de los Llanos and, ironically, as Playa del Cenicero (something that, as we have seen, we try to avoid).

However it is known, the Lindes beach has a sandy area of around 1,400 meters and a width of 40 meters that extends from the Manzano stream to the Mascuñar ravine.

It has a moderate swell, a lot of vegetation and has easy access and abundant services as it is in a clearly urban environment.

It shares very similar characteristics to the beaches of El Morche -with the presence of natural vegetation and dune landscapes- and Ferrara, although with a relatively lower occupancy rate.

In this coastal area there is a population of the protected plant species called pancratium marítimum, known as the maritime lily, which grows in the dunes. 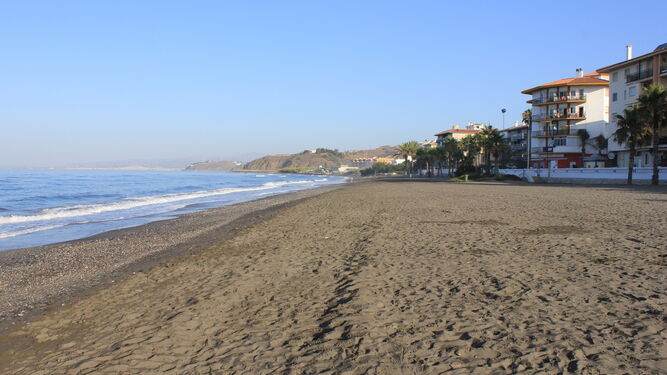 Morche beach is one of the best-known coves in Torrox. It is the westernmost of the municipality and is located between the Veleña beach of Lagos and the beach of Las Lindes.

Its extensive surface, a kilometer and a half long and a considerable 50 meters wide, is mainly made up of fine dark sand and is usually a highly recommended place for swimming and family rest thanks to the gentle waves.

It is a busy cove, but it still maintains well-cared spaces, such as the dunes in the La Carraca area. A well-preserved dune ridge on its front (not so much on its back), being an area that does not have a promenade or beach bars, making it unattractive for the average tourist.

With little infrastructure, this area of ​​El Morche is not one of the most frequented, although around it there are spaces in a more urban environment, increasing services and the influx of bathers.

In fact, the rest of the Morche beach does have a promenade and, therefore, a comfortable and easy access that makes this cove a busy coastline full of life. 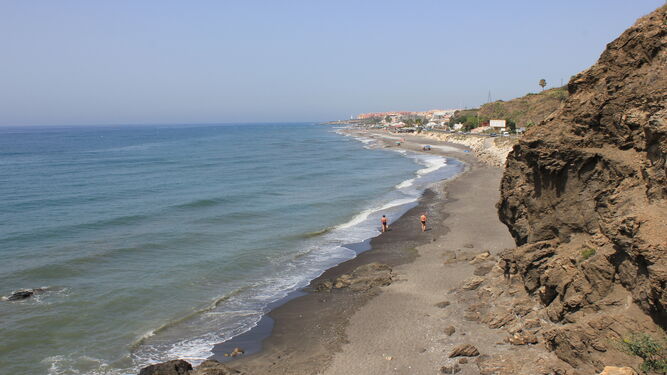 Like Peñoncillo beach, Mazagarrobo beach -also known as Tajo de la Virgen- does not usually have an excessive influx of people and has limited services. Luckily, the proximity to the town ensures that any urgent need for services, restaurants or leisure that may arise unexpectedly is easily resolved.

Mazagarrobo beach, despite being hidden and having a low influx of people, has easy access. Small cove of highly variable width and length, continually subject to currents and waves, in the bathing season it maintains, however, an average length close to one hundred meters and a width between 10 and 20 meters.

In fact, this beach is divided into two areas: on the one hand, the sandbank itself and, on the other, a series of small cliffs that are like a miniature sample of the Cliffs of Maro, which we find further east, in Nerja. 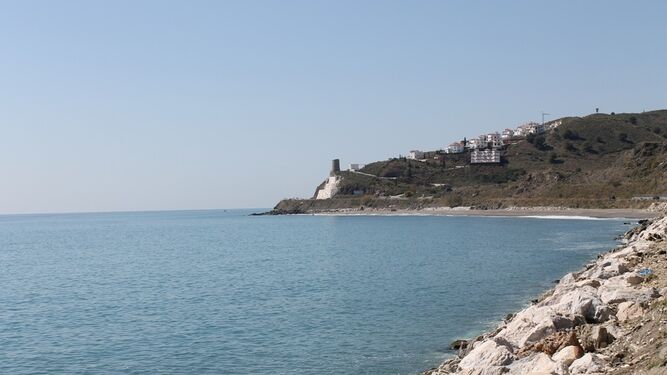 Unaware of buildings or apartments, Calaceite beach runs parallel to the national highway, but sheltered by some sinuous mountain ranges.

With dark sand, and 400 meters long and 40 wide, this protected area is an open secret with a low number of visitors. In fact, its services are not those of an urban beach, like those that we can find in other places in Torrox and the rest of the Costa del Sol.

The waves are moderate as a general rule and bathing is extremely pleasant, which makes it a good option for leisure, sports and family relaxation on the Torrox coast. 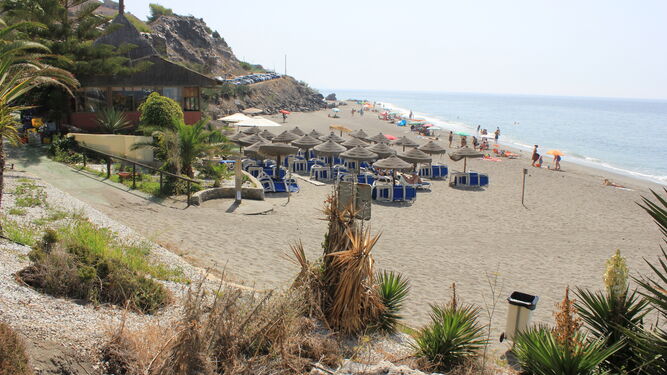 Lastly, Vílchez, Vilches or Wilches beach is the cove located at the easternmost end of the town, on the border with Nerja.

Vílchez beach is a small and charming cove only 200 meters long and 20 meters wide, quite isolated from the crowds of nearby towns. Its occupation is generally low, with usually moderate waves and easy access on foot, this area of the Torrox coast is a small hidden treasure, isolated and with coves of fine dark sand.

Although secluded and quiet, it has basic services such as parking and rental of umbrellas, sun loungers and hammocks.

INFORMATION SHARED FROM THE WEB